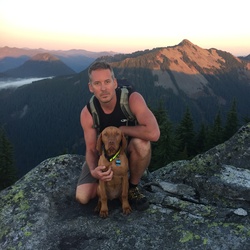 This was a trip to VN with the Mountaineers as part of the Experience Field Trip for this year's Scrambling students. It was brutally hot but everyone did well and had a great time on this challenging scramble. This had trip had been on my list for quite some time. The stars finally aligned and it was as glorious as I had hoped it would be - easier too! Theo found a deer leg from a likely Cougar food cache and carried most of the way to the Volcanic Neck-Bean saddle.

There was snow cover from Fourth Creek Pass to just before the VN-Bean saddle then there was some along the ridge to both Devil's Head and Bean Peaks. Otherwise it was straight forward and enjoyable. I did get snowed on going in but the skies opened in time for some glorious summit pics.