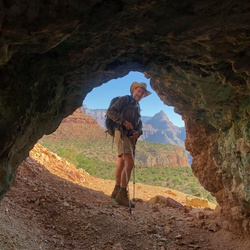 The whole range of peak is properly referred to as San Francisco Mountain. It's a stratovolcano.

The trail begins at the Arizona Snowbowl ski resort intrusion in the Coconino National Forest.

Humphreys Peak was named in about 1870 for General Andrew A. Humphreys, a U.S. Army officer who was a Union general during the American Civil War, and who later became Chief of Engineers of the United States Army Corps of Engineers. An undulating hike through Ponderosa, Aspen, and Fir.

Starts and stays fairly high. Near the 9,000 foot level all hike.

Terrific views of Fremont Peak.
A good choice when it's hot in the lowlands. Also spectacular when the Aspens sprout Fall colors. This lollipop loop uses unmaintained trails in Grand Canyon National Park. One hikes sharply down the Grandview Trail to Horseshoe Mesa, along the West side of Horseshoe to the middle trail (historic route) off the Mesa and down more to the Tonto Trail. The Tonto lilts E then S along to where it meets the return trail to the Mesa, past Page (sometimes called Miner's) Spring. Retrace the climb back to Grandview Point. 12.4 miles, +/- 3800'; ERM of 27.6 (yowee!) (ERM is Energy Required Miles - see the WV for a definition and summary -- http://wildernessvagabond.com/WV-GC-trip-links-all.htm )