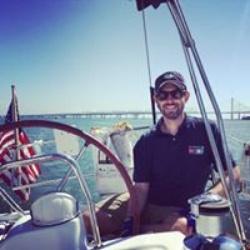 Hidden Falls are also sometimes called Tenaya Creek Falls or Three Chutes Falls. Depending on the season and runoff levels, water cascades down the rounded rock face in three major plumes. There is a nearby flat rock to bask on that also doubles as a primo picnic spot. This is a special spot beloved by locals - be respectful and don't mess it up!

The off-trail hiking is difficult and rockfall in this area can be dangerous (especially after/during a rain). Beware of slippery and loose rocks, don't wade or swim when the conditions are not safe. People have died here. Do not venture past the top of the falls as it is very easy to become lost in the "Bermuda Triangle" of Tenaya Canyon.

Short Hike: Hike to the far eastern end of the Mirror Lake Trail and stop at the footbridge. Look for an obscured, unofficial trail on the southeast side of the creek. Head upstream, boulder hopping and scrambling. Use a large downed log to cross the stream and after a bit more ascending you'll see the falls. They are about 1/2 mile from the footbridge.

The history of access to Yosemite Valley is interesting – highways 120, 140, and 41 have not always been there. One of the first paved roads into the Valley was the original Big Oak Flat Road (a history can be found here). It was a dangerous road and was eventually replaced with the safer tunnel design of the current road, and then eventually taken out via a major rockslide in the 1940s. Today this road is an afterthought, a forgotten footpath frequently blocked by rockslides and overgrown trees.

This road is quite visible from many points in the Valley. As you descend 41 from the Tunnel View, look across the valley at the slopes west of El Capitan. You’ll clearly see an old road cut through the terrain. It disappears in places (where it has been taken out by rockslides) but it’s easy to visually pick it out.

Walking this road is a pleasant stroll from the Valley floor, at least until you start to reach the rockslides. To find the beginning, head west on Northside Drive. Past El Capitan Meadow, you’ll see a large pullout on the right – and probably some cut deadfall. Park here and follow what looks like a maintenance road – this is actually the old road.

You’ll pass by some cut trees and random brush piles but eventually pick up the old road as it climbs slowly up the Valley walls. It’s a pleasant walk for a while – not too overgrown or rough. Eventually the views open up and you’ll get a great view of Bridalveil falls across the Valley. Look behind you to see El Capitan.

The route is simple – just follow the old road. There are several places where rockfall has blocked it, but in most places it is easy to scramble through the talus and pick up the road on the other side. When we did it we stopped at the biggest rock fall (see track below). This is where the original switchbacks were and finding your way through the rockslide can be dangerous and tricky. We decided not to proceed since we were hiking in the rain – it was cold, the rocks were slick, and we were on limited time since we wanted to get out of the Valley before the rain turned into the predicted snow. A bit of googling will reveal information about continuing along the road through the rockfall and up to Rainbow Point. I’m going to have to wait for another trip to explore it on my own.