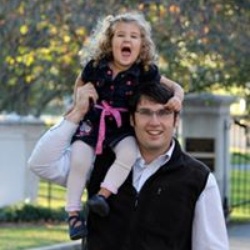 This was the last trail on Mill Mountain that I had not been on.  It is really the most unimpressive of them all.  The trail was probably at one time a gravel access road to Crystal Springs Reservoir.  The reservoir is no longer used, but there is the overgrown remnants of it, which might interest some.

I had a trail run and decided to visit more of the trails on Mill Mountain.  The trails are kept in fairly good condition and it is nice to only have to travel a few minutes to be in the woods.

I had another training run for my marathon.  I've been wanting to hike the Carvin's Cove / Hay Rock Overlook section of the AT.  The trail was a little muddy over the first mile due to heavy rains from last night, but once I gained a little elevation, the trail was beautiful.  The overlooks into Carvin's Cove were great.  Hay Rock is also definitely worth the trip.

During a marathon training run, I ran around some of the trails on Mill Mountain.

Summit of North Mountain (aka The Dragon's Spine)

I've been training for the Blue Ridge Marathon.  It was another long run training day.  I decided to get out on the trail to break up the road running.  I've been wanting to hike North Mountain, which I've heard was part of the Appalachian Trail years ago.  Today, the AT runs up McAfee Knob.  I parked in the Dragon's Tooth parking lot and crossed 311 to the trailhead.  The trailhead actually has a nice bulletin board with map.  The trail is marked well by yellow diamonds, although it would be pretty hard to get lost figuring the trail runs the ridge line.  The trail begins with a steep ascent until you gain the ridge line.  Most casual hikers would probably not find the ascent worth the effort since there is no &quot;spectacular&quot; viewshed.  Although, if you want solitude this mountain will normally grant your request.  I was probably the first person on the trail in several months, at least in the beginning.  The ridgeline was still covered in snow.  It was kind of strange, because 5 feet to the right on the south slope of the mountain, the snow had melted.  It was not feasible to hike there though, so there I was trudging through the snow, a few inches in some places to drifts that were a few feet in depth.  There were no noticeable tracks in the snow, other than animals, so that is why I think I was the first person on the trail in awhile.  That was until 5 miles or so in, my solitude was interrupted by a strange sight.  Two runners blazing down the trail towards me.  We shared a few words.  &quot;I thought I was the only one up here,&quot; I said.   &quot;A group of friends get together to run, you'll see more later on.&quot;  And then they were gone.  I'd get the opportunity to meet a few more runner later on, but first, I had a bit further to gain the summit of North Mountain.  So onward I went.  The summit is not very noticable.  Most people would mistake it for one of the ridgeline bumps.  I had my GPS, so I knew where it was.  Just a few feet higher than some of the other bumps.  But there I was and in fact there is a rather nice view at the summit, at least in winter.  There is a small opening through the trees, which exposes a nice view of the North Mountain ridgeline.  After the summit, I also noticed that I could go about another 1/3 of a mile and reach the corners of Botetourt-Craig-Roanoke Co.  The area was covered in snow.  I saw a pile of rocks in the vicinity that could have been the marker, but it also might have just been a small firepit.  So, I turned around and headed back.  Along came some more runners.  Three fellows were not going nearly as fast as the first two.  They were walking the uphills and jogging the down.  I stayed with them for a bit.  They were nice and I was able to find out more about why they were up on the mountain.  They were a group of ultramarathoners out on an unofficial race, more like a group of friends running 35 miles or so.  The &quot;race&quot; was called the Catawba Challenge.  They were already 25 or so miles into the race out of 35.  The loop took then up McAfee Knob over to Tinker Cliffs around North Mountain up Dragon's Tooth and back to the start, 9000 feet of elevation gain.  Crazy.  Eventually, I made my way back to the parking lot and found one of the aid stations to the &quot;race.&quot;  I chatted a bit, met a few more runners.  They graciously offered me a few snacks.  And then I was on my way.  The ultramarathon has always intrigued me, it was neat to meet a few of the runners.  Who knows, maybe one day I'll try a 50k race.

I took a quick training run through the woods along a yellow blazed trail.

I've been training for the Blue Ridge Marathon on April 24, 2010, which has over 3000 ft of elevation gain.  Running up Mill Mountain has been good practice.  The Mill Mountain Greenway leaves the Roanoke River Greenway and travels along a few streets before leading to the old road up Mill Mountain.  The road now serves as a long driveway for one house on Mill Mountain and as a greenway.  Although, the greenway only gets the most dedicated users because of the elevation gain.  So, I made the trip up, slowly jogging, with a few short walking breaks.  The top of Mill Mountain rewards the traveler with excellent views of the Roanoke Valley.  The views seemed even better considering I used my own locomotion to get to the top.  Coming down I used the short Watchtower Trail to connect back to the Mill Mountain Greenway.

Mill Mountain, Roanoke City's highest peak, has several trails that traverse it's face.  I decided to discover the Monument Trail, which turned out to be quite beautiful.  There is no designated parking area if starting where I began, but one can find a spot alongside the road fairly easy.  The trail hugs the mountain gaining elevation at a relatively easy grade.  I got to see the effect of the earth's tilt on this hike as the north side of the mountain was covered in snow and the south side mostly dry and mostly without the snow from several weeks ago.  The trail finishes (or begins) at the spur road leading up to the summit of Mill Mountain.

The Wolf Creek Greenway is a cinder ash/paved greenway that runs a little over 2 miles.  A good portion of the greenway runs alongside Wolf Creek and offers a scenic pathway for walking/running.  The path also runs through several parks, which offer further recreation opportunities.

The Tinker Creek Greenway is a paved trail, which runs alongside a portion of Tinker Creek.  The Greenway also runs through part of Fallon Park.