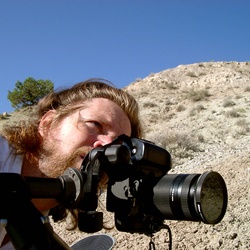 I hadn’t been to Kasha Katuwe in years. It used to be one of my favorite places to go when it was still Tent Rocks and the road in was dirt (or mud) and washboardy. When there were no restrooms and no people. Used to be there was no trail to the top and you had to scramble up, sometimes on your hands and knees, and slide down on your rear with your feet for brakes and steering. Now it has become “discovered” and domesticated. The road in is paved. I can’t get in for the golden light in the morning or stay for the golden light in the evening. There’s a ranger that goes to the top and starts shooing people down at 3:30 (in the winter). There's a lot of narrow spots and it seemed like with all the hordes of people I was either dodging them, waiting for them, or shooting around them.
So in the midst of all these uncharitable thoughts, I was seduced. Seduced by the curvy, sinuous (sensuous?) narrow passageways that sometimes requires you to lean over sideways to make the passage, which always tickles me. Seduced by the other-worldly pointyness of the tent rocks, and ultimately seduced by the light. The ranger passed me on his way up so I turned back figuring I’d be more unrushed then. Every step became a meditation. People hurried past me and I wondered how many realized the golden hues on the sun-shaded walls was the reflection of the light on the opposite wall. How many even saw it? It still wasn’t like ‘the good ol’ days’ but it was good, just different. I came out of the dark, shadowed passages into the light, smiling.

I dipped into the badlands and explored arroyos, the trails of badlands.  I'd go up one then turnaround and go up another.  I barely touched the surface of what there is to explore, just in this neighborhood

This is not a hard hike but I went slow to enjoy because I was enjoying so much of what I was seeing.  The first mile or so is through mixed Ponderosa Pine and thin aspen stands then you climb into meadows and long views.

Mile after mile of flowers.

Into the heart of Lybrook Badlands

This route takes me to a saddle and into Becente Tsosie Wash and deeply clove canyons. A short but steep hike up to Otowi Peak with long views of the land and the wild Rio Grande River passing through it. I continued my exploration of Lybrook Badlands, looking for a way down from on top.  Again, unsuccessfully. This is one of my very favorite walks close to home Beware of the way you go! Roaming on the backside of Rockhound State Park

Found this little patch of wild land with the poppies glowing gold in the low sun and the desert green, so rarely green.