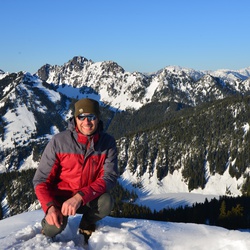 Del Campo Peak is a prominent summit near the western edge of the North Cascades, in Snohomish County of Washington state. It is located south of Barlow Pass along the Mountain Loop Highway near the Monte Cristo area. It is situated on land administered by the Mount Baker-Snoqualmie National Forest. The mountain is named for a mining claim on the mountain's slope.[2] The nearest peak is Gothic Peak, 0.5 miles (0.80 km) to the southwest, and Foggy Pass is the low point between the two peaks.[1] Foggy Lake lies in Gothic Basin below the south face of Del Campo Peak and collects precipitation runoff which ultimately drains to South Fork Sauk River via Weden Creek. Runoff from the west side of the mountain drains into the Sultan River, and the north side drains into headwaters of the Stillaguamish River. In terms of favorable weather, the best months for climbing are July through September.