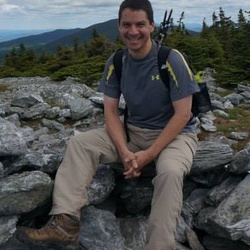 Great day to be out in the mountains. Started off mostly cloudy, some very light flurries (the slow motion kind, purty). But the sun broke through around 2pm and blue sky took over -- of course, _after_ I was well on my way down off the summit.

Still, had great views, and thrilled to now be at 99 of a second round of the New England 100 Highest, this one in Winter. On the summit I looked longingly east, past the east peak of Goose Eye and along the ridge to Old Speck, and toward Baldpate -- which should be #100 in the next week or two.

Old logging road off Success Pond Road was not plowed (didn't expect it would be), and didn't see any evidence of any human travel on it or the Goose Eye Trail. Lots of moose, though, lower and higher. I saw more fresh evidence on my way down, too, that wasn't there when I hiked in.
One moose poached my trail, the bugga!

Snowshoes the whole time, broke trail from car to summit on this solo hike. Snow is pretty well consolidated, but is showing signs of softening up. Steps were stopped at 12-18" max, not bad. Was able to stay with the trail for much of the way until just before the summit cone, where some minor blowdowns messed with things. Here, I kept ascending pretty much straight up, but did keep left to come up the ridge and onto the cone; don't go right as you approach the cone, or you'll need your ice/rock climbing gear!

Great mountain. Had planned to finish on it, but chose instead to finish with friends on Baldpate. This was a great penultimate peak, though, and a nod toward my love of solo hiking. I'm so thankful to be able to do this stuff; it brings a lot of joy to my life.

For most/all of the 11 of us in the group today, Elephant has become a joy to hike, especially in Winter. The mountain has a reputation for its sections of very thick growth, heading up pretty much straight from the traditional summer "trailhead." But based on some past experience and referrals, we headed right of that general route, which provides much more open woods, and some clearings that provide stunning views as far as Baldpate and even the Northern Whites (Madison + Adams) beyond. Bluebird sky day made these views stunning.

A solo hiker broke out the road ahead of us, and the lower half of the traditional herd path. We diverged more to the right of his track halfway up, though, to take the easier, more open route to the col between the higher Elephant peak and its slightly shorter sibling. The going was much easier than many of us have experienced, and we have a newfound love for this great mountain!

Thanks to Amal, Chris, Douglas, Ken, Lynn, Mark, Michael, Mike, Mike, and Tabitha for sharing the trailbreaking duties, and making the overall experience an awesome, memorable one! Winter hiking of these lesser-known peaks is really the da bomb.

Lost GPS connection on the way down for some reason, hence the "straight line".

Another "Spring" day in the beautiful southern Greens. Returned to Dorset for a Winter turn this time. Sections of trail along the logging road beyond Tower Road were without snow, but by 1600' it was more consistently several inches deep except around some of the water bars.

Followed a snowshoe track up to a point a couple hundred yards from the junction with the old ridge logging road, where a tree had fallen. The snowshoe track just stopped there and they seem to have turned around, as there was no other noticeable track beyond that point. I knew where I was going, though.

Well, I knew where I was going, but I ended up preoccupied enough to miss the "traditional" turn off the ridge logging road. No matter, though, as I realized at the one after, and took it since I figured it would likely head straight for the summit or intersect with the herd path between the north (summit proper) and south (old tower) peaks. Thankfully it did end up intersecting, and I found that whole section of the herd path to the summit had been broken out by a snowmobile at one point (close quarters for such a thing!).

At the summit, the sign is gone but the canister was there (this one opens from the top). I couldn't find any register entries since late October (Beaupre/Haynes on 10/27 and Harley on 10/29). Hopefully the sign lay beneath the 2-ish feet of snow on the summit somewhere... Took the traditional herd path over to the North summit to visit the old tower again, then "whacked" down to join the traditional herd path and eventually the ridge logging road again. Had fun along the way in a few places, "snowshoe skiing/glissading" down stretches with enough snow to allow it.

Above that downed tree, was breaking trail and sunk up to 12-15" down in places mostly because the snow was so soft from two days with temps in the upper 40s; not terrible, though. Overall there doesn't seem to be more than maybe 2-3 feet of snow on this mountain up high - less than a foot down low. Took a total time of just under four hours -- 2h15m up, 1h30m down. 94 of Winter NE 100

An epic return trip to Baxter State Park, the third in Winter and fifth overall. With this trip in the books, I've completed the six high peaks there for a second time, this time in Winter.

Serious snow depth of 2-3 feet from a recent storm required strength and resolve to forge ahead. Five of us started the day, but only three ended up summiting. Everyone in the group had a fantastic time, though, and I'm sure we'll all hike together again!

Congratulations to Liz for completing her second round of New England 100 Highest, this time in Winter. What an accomplishment, and it wasn't without its obstacles along the way. She persevered and has so much to be proud about.

This brings my quest to complete my Winter second round of the 100 highest, to 76. Great to be done with the Baxter six on that list, but I know I'll return to Baxter many, many more times. It's a truly special place.