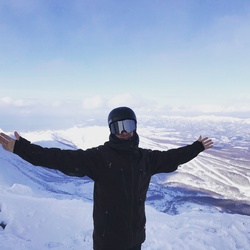 Avalanche danger was considerable to high in the area. Decision to tackle south facing slopes and to travel on low angle slopes only. Missing the second part of the tour. Which went from start of that line to the dot. Broke trail all day, very slow and tiring. Snow soft but deep. Rocky base and amazing ski down. Visibility went from poor and windy to medium clear and light wind. Tour completed with Quino Gonzalez.

We met in a coffee shop at 8am at the bottom of the valley to discuss the plans. Ironically inbound skiing would be awesome, soft snow on a proper base