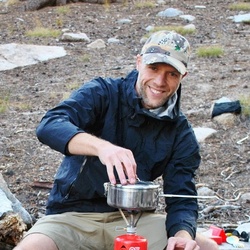 A large volume class II run. Starting at the Mile five bridge everything is nice and mellow until arriving at the rapids at Becker's Chalet where things pick up into a class II wave train through the s-bend. Just past the s-bend on the left side of the river is Becker's hole which is a fun play spot at certain flows. After Becker's rapid are a few more rapids involving big wave trains and small holes here or there until the Alpine Village take out. From Alpine Village to Old Fort Point is quite mellow.

A fun canyon run that can be done after work or even during a lunch break if you hustle. The rapids are all scoutable on the hike upstream. Be prepared for an audience as this is a popular tourist destination. There are 4 main rapids: Turbobooster (III+/IV): The lowest of the rapids. It is barely visible from the trail through the trees. Hike down to the river from the trail for a closer look. Two Timer (Double Drop) (IV): Just above Turbo-booster consists of 2 holes. Most go left at the first and right at the second. Ledge drop (Fourth Bridge Drop)(III): Easily viewable from the trail. A ~1.5m ledge drop. Pick a line. The Sickle (V): Most difficult of the rapids. It is upstream from a small canyon and a boulder garden. At medium flows the large hole in the middle of this rapid gets sticky. Most try to punch it on the left. Pick a line in the boulder garden around the corner. Put In: From the take out cross the bridge and hike upstream. Put in as far up as you see fit. Most common put ins: *Below Turbo-booster, Between Turbo-Booster and Two Timer, Above Fourth Bridge Drop, Between the Sickle and its associated boulder garden (sweet seal launch from the ledge), or Above the Sickle.
https://paddlingmaps.com/trip/Alberta/84-canyon

This run is quite continuous and takes about 30 minutes on the water. It runs through old growth forest so be aware of the many log jams. The crux is an old demolished weir about halfway down the run near the warden station. It creates a little wave train and flushy hole. There is a trail that runs along river right from put in to take out and makes things easily scoutable. Starts running in May and is usually runnable until late summer. Highest flows usually occur in June. Flow is easy to assess at the put in. If the river looks high it is high. If the river looks low it is low. A rough estimate can be made by looking from 5th bridge downstream to the midstream boulder ~150m downstream. Low: The boulder is well exposed Medium: The boulder is visible High: The boulder is a hole.
https://paddlingmaps.com/trip/Alberta/85-5th-to-6th-bridge

16.5 loop without Alta peak or mdw

30 mi w peaks and off trail