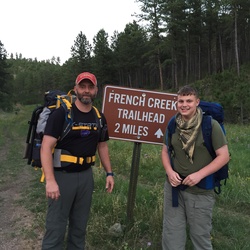 The Mount Harney loop was described in a book that Mike A. had as a 8-9 mile loop. It was actually around 14 miles. So we being the smart ones we are we didn't plan on doing more than described. We didn't bring a filter to get water from the streams so we all ran out of water on this trek. We didn't carry our full packs, just day packs and water bottles. We started at the Willow Creek Trailhead and made our way along the marked trail. The trails were very well maintained and this route proved to be easy to moderate. Outside of the unexpected distance and our water situation this was a nice hike. The top of Mount Harney has a structure that used to be a look out for forest fires. Very interesting history. The living quarters and the pumphouse still have wire in the conduit from when it was installed. This trek was done on Thursday of our trip.

Our trip included backpacking the Centennial Trail from the French Creek Horse camp in Custer State Park to Mount Rushmore. You can follow our trail marked by the red line on the map. However my phone died after we left the Iron Creek horse camp, so I will describe it here since this doesn't allow you to edit an existing track. It will allow you to create a route.

From iron Creek horse camp we took the Centennial Trail (CT) to the Grizzly Bear Creek Trail. We continued on this trail to the Horse Thief Lake Trail, and took that to Horse Thief lake. Very nice lake and campground, along with a great camp host named Gloria. We spent Monday night there. On Tuesday we got back on the CT trail from Horse Thief lake and camped Tuesday night around the Blackberry trial that leads up to Mount Rushmore. We camped along the Grizzly Bear Creek just outside of the National Park since you cannot camp inside the park borders. We spent Wednesday at Mount Rushmore. Thursday we hiked Mount Harney, which I have saved as a separate trip.